Chicken Little and the Sky is Falling 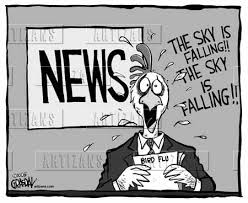 What we’re seeing in the news is exactly what Chicken Little’s folktale warns us about. First there’s a non-event, a leaf lands on Chicken Little’s tale, that causes Chicken Little to over react and panic. A Leaf on the tale equals the sky is falling. 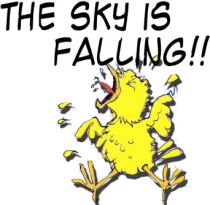 Everyone got into a state of panic because one drama loving Chicken went from a nonevent, the leaf landing on his tail, to a worst-case scenario. Chicken Little managed to convince everyone the end was near. 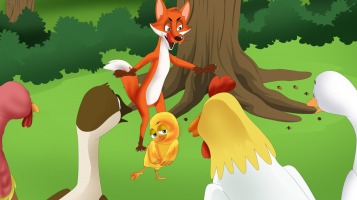 They all went home and lived happily ever after.

The nonevent we are witnessing now is the allegation of collusion between the Trump campaign and the Russians. If there was any substance to it the facts would be public by now. The worst case scenario is that the Trump Campaign was elected because they colluded with Russia to steal the election from the Clinton campaign. The main stream media is less concerned with facts or reality than they are concerned with causing President Trump to look foolish and incompetent so they spend every day screaming that the sky is falling.

Too many voters in this country are as naïve and gullible as Henny Penny, Ducky Lucky, and the rest to ask the questions that will calm the panic.

We don’t have enough Foxy Loxy’s in this country.

The sky is not falling, and the false narrative and inflated sense of panic created by the main stream media significantly impacts the media’s credibility. The day will come where there will be a real story and their constant stream of the sky is falling will drown out the severity of the real crisis.

A well fed middle aged male with strong opinions and a sense of humor. I was a Commissioned Officer in the United States Army Military Police Corps. I also spent some years in manufacturing management in both union and non union environments. I know how to lead and how to supervise. I also know how to share what I know. My degree is in Criminal Justice so that means I have a background in Psychology and Sociology. When you couple my Law Enforcement and Security training and experience with my education and experience in management and leadership you get a unique view on Supervision and Leadership.
View all posts by gino984 →
This entry was posted in Election 2016, General Political Issues, Humor, Trump and tagged Chicken, Freedom, Humor, Politicians. Bookmark the permalink.