The Media Gave up thief Credibiliy! 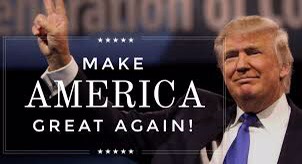 The game is clearly rigged! The media is biased to a point that they don’t even try to appear to be fair and open minded.

Theee are the same people who construct then conduct the polls! The media is constructing a the message that Trump is unqualified to be president. His years of business and entertainment covered great success and failure! He created jobs and made money. Were there some failures and losses along the way? Of course, but there was far more success than failure. And remember until he ran for president he wasn’t a rasict or mysoginis, they portray him as one now because he’s running against a democrat.

I would rather have an unsuccessful business man or woman in office than a professional politician. A business person knows how to communicate and cooperate to get things done!

In spite of the obstacles created by the forces of the status quo Trump is doing very well.

He has a plan he has a positive message he wants the common man to be the winner in this election!

Believe in the number stickers and the lawn signs, believe the people you talk to about this election. Believe your pocket! The candidate who promises to make your paycheck better is the candidate who wins!

No one ever won an election just by throwing mud at thier opponent!

Believe in what you see and hear, not what the Main Stream Media tells us!

They stopped being the public watch dog years ago, and they started being advocates for their own vision!